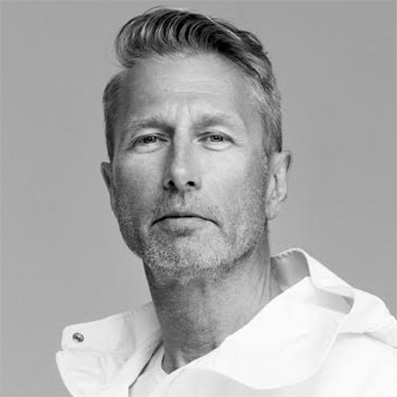 In July this year, representatives of Russian VOX Architecture bureau won prestigious RED DOT Award 2018 in field on interior architecture and interior design with their WORLD CLASS Olympic swimming pool project. B – Boris Voskoboynikov is the founder and the chief architect of VOX Architects studio, while his colleague Maria Akhremenkova M – holds the position of partner and bureau’s creative department director. Design Mate has invited them to discuss development of such important direction in urban economy as the regional airports and their aesthetics, which becomes more and more obvious and attractive thanks to their latest new air terminal projects.

How does the state-of-art regional airport affect the urban economy of the city?

Construction of new airports or major renovation of existing facilities serves to expand the transport hub capacity, increase the passenger flow, facilitate communication and make a city more attractive in terms of internal tourism, business and investments, since such projects enable an airport to accommodate more aircrafts or accommodate aircrafts of new different classes. The transport infrastructure resembles the blood vessels in the human body: if they function properly, the body is living, healthy and vigorous, but if the blood flow is concentrated only in central parts, the peripheral tissues suffer necrosis, and all body systems gradually start to fail. Therefore, not only the regional airports, but also the regional rail and multimodal transport hubs are vital for the national economy in general. 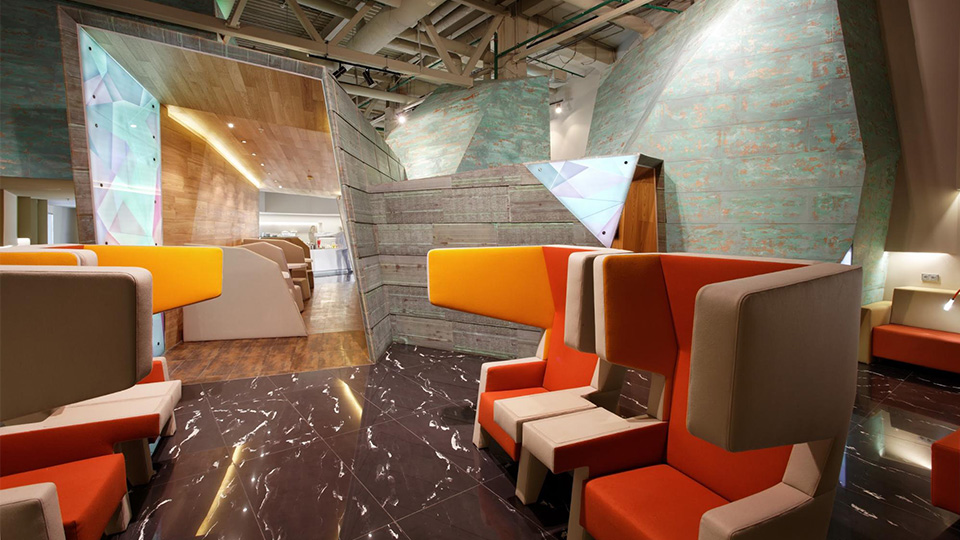 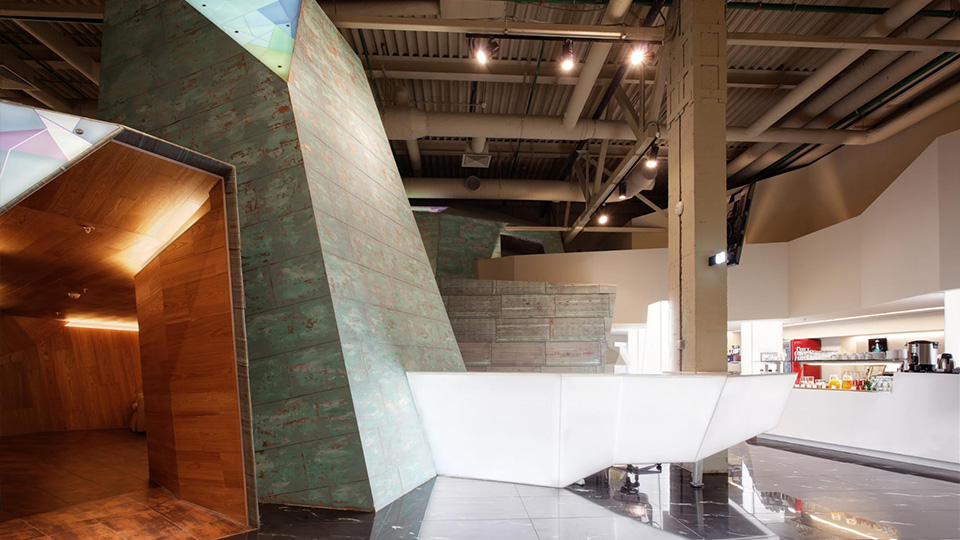 Currently, construction of new Gagarin International Airport is in progress in Saratov. The project also involves erection of adjacent railroad, and the airport area is already surrounded by new urban districts under construction, thus justifying the investments into modern state-of-art infrastructure. The management company, Airports of Regions, has adopted highly appropriate and sound approach regarding its facilities: they don’t just do business, they create cultural objects by filling the utility points with deep profound meaning closely associated with unique features of respective locality. For instance, this airport was initially called the Central International, but later it was decided to change the name to Gagarin, since the legendary astronaut landed in this area after his first space mission. Therefore, the design of entire facility is based on this Gagarin-themed idea.

What is the difference between regional and capital city airport?

Each airport is the complex structure, which comprises several independent operators, including, but not limited to the runway and accessory engineering utilities, the aircrafts owned by the airlines, the air terminal itself, and the national security offices. These units are completely different, but they must ensure smooth and efficient interaction. For example, Platov International Airport in Rostov-on-Don was moved to a new location (the old airport was built almost within the city limits – ed. note). The fresh infrastructure was developed, including construction of motorways connecting the airport with surrounding nearby objects. This contributes to development of the whole new economic direction, where the business districts, shopping malls and entertainment facilities may occupy a convenient location in the close proximity to the airport. At the same time, there exists a number of issues with older Moscow airports, such as Bykovo Airport, which earlier ceased its operation. The real estate development approached so close to the airport area, that it gradually lost the ability to perform as intended. Therefore, when constructing new airport, it is essential to have sufficient surrounding free space in order to ensure decent state-of-art standards of safety and quality.

A capsule hotel was opened at the Vnukovo International Airport fairly recently. Such practice becomes popular and highly-demanded all around the globe. For instance, the John F. Kennedy International Airport in New York is planning to open a hotel within its territory in the next year. In your opinion, does this idea has a future?

It’s a complicated question, but I personally don’t think that all this capsular story has much future. Transport communications are constantly improving, and the situations, where a person has to spend a night at the airport waiting for a flight, will be sooner or later eliminated. The flight connection time becomes shorter, and delays occur more and more rare. Earlier we didn’t have modern flight navigation systems, so the aircraft couldn’t take off the ground in a foggy weather conditions. Now it isn’t a problem anymore. On the other hand, a hotel located within the airport grounds may offer some obvious benefits thanks to the convenient transport accessibility. There are some highly successful examples of airports being built in the unique location good for both business and recreational travels. 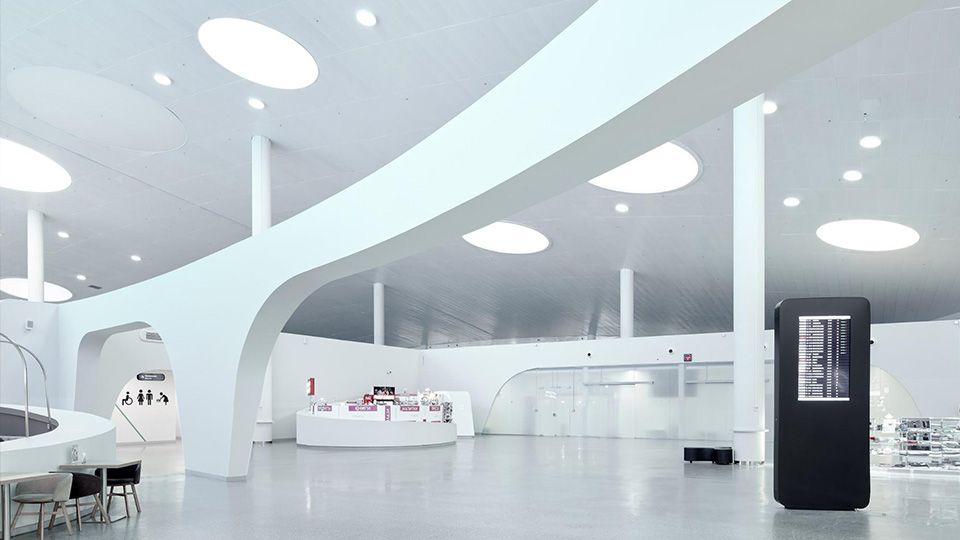 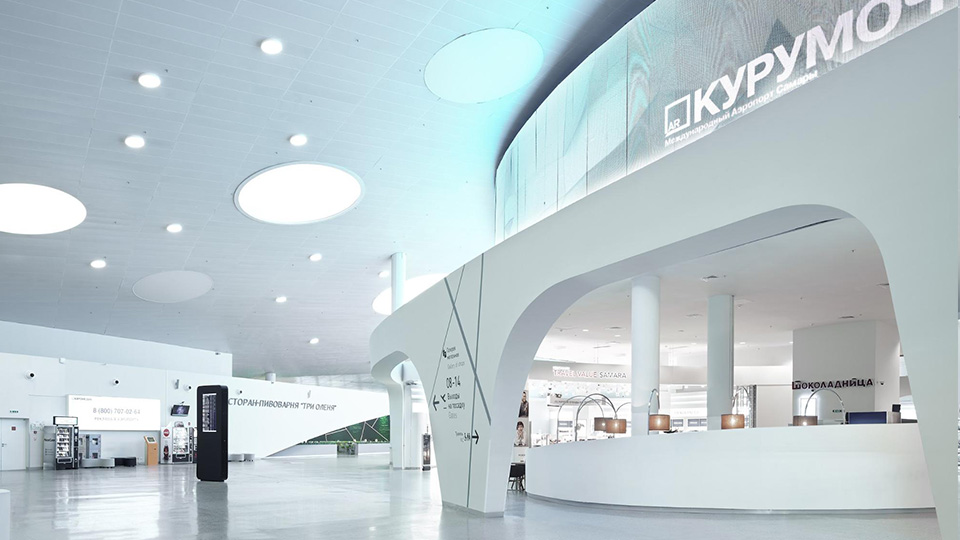 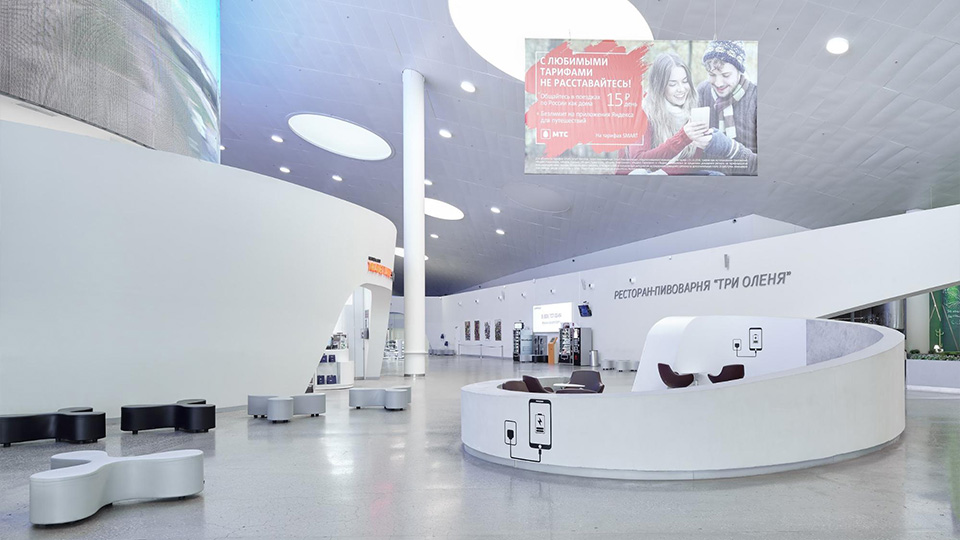 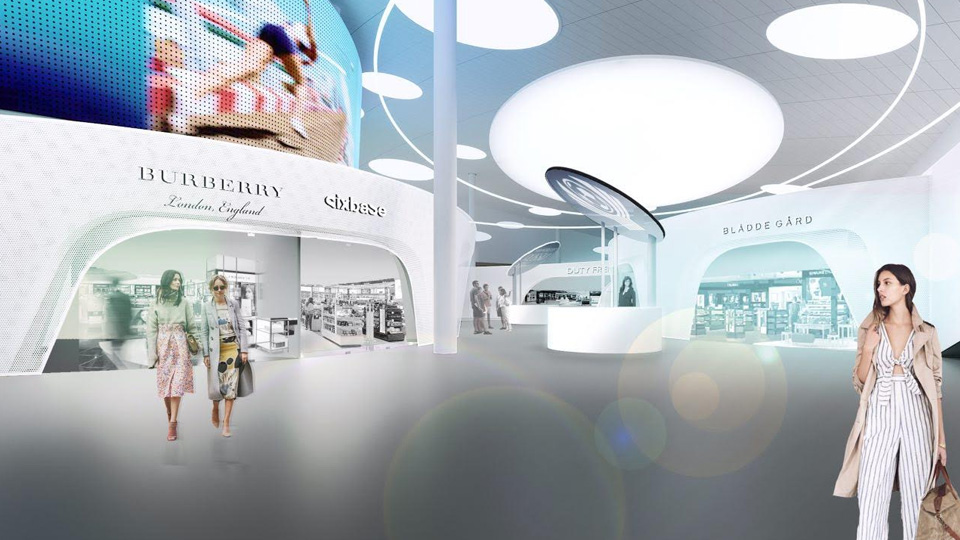 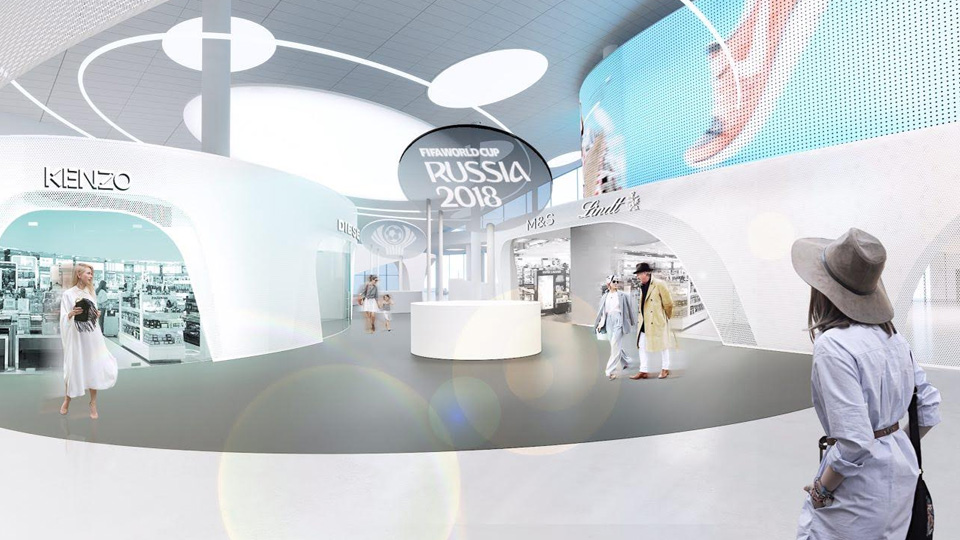 Are there any chances that the airport may become an interesting spot for visitors and sightseers thanks to its interiors? For example, the airport interiors you design are rather unique.

It’s mostly a merit by Airports of Region, the management company we work with on the airport design. They have made a bet on individual imaginative solutions for each airport. Today, advanced developers and management companies pay more and more attention to the design and architecture of their facilities. Although, I don’t think that the airport architecture and interiors may actually prompt people to come and see it like in museum or something, no, no chances at all. But still, individual approach creates the feeling that the company does actually cares for the passengers.

I was at the new airport opening ceremony in Rostov-on-Don and saw the local residents coming to see the new space. They were actually pleased to realized that something like that had been built in their home city. They proudly feasted their eyes on the building and took pictures in front of it. The airport is bright, spacious, it has a lot of air and does not create the feeling of constrained space or give rise to claustrophobia. It’s safe to say, that this is the world class project.

Airport is always a lot of stress: passport checks, screening, flight disruption. People get nervous. Which aspects should be taken into account when designing air terminal interior in order to create calm and comfortable atmosphere? 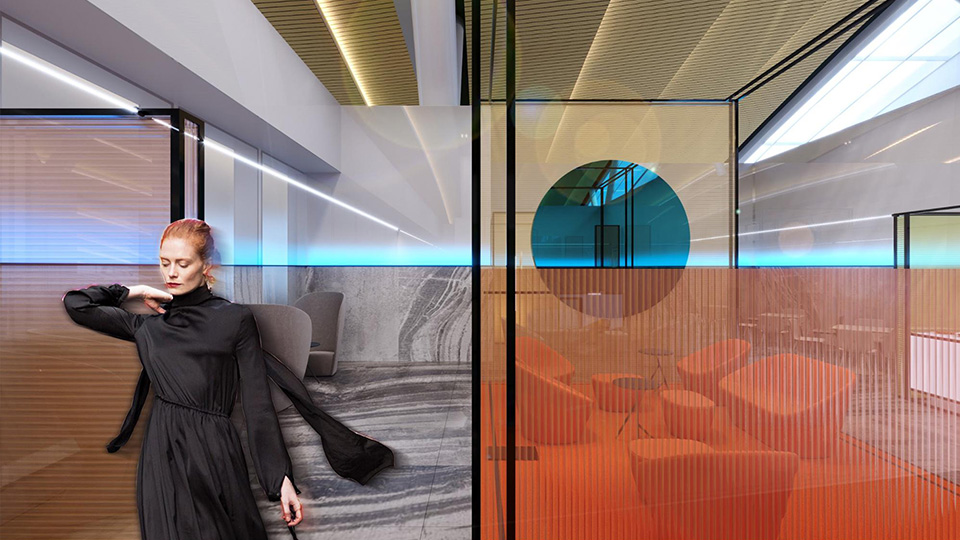 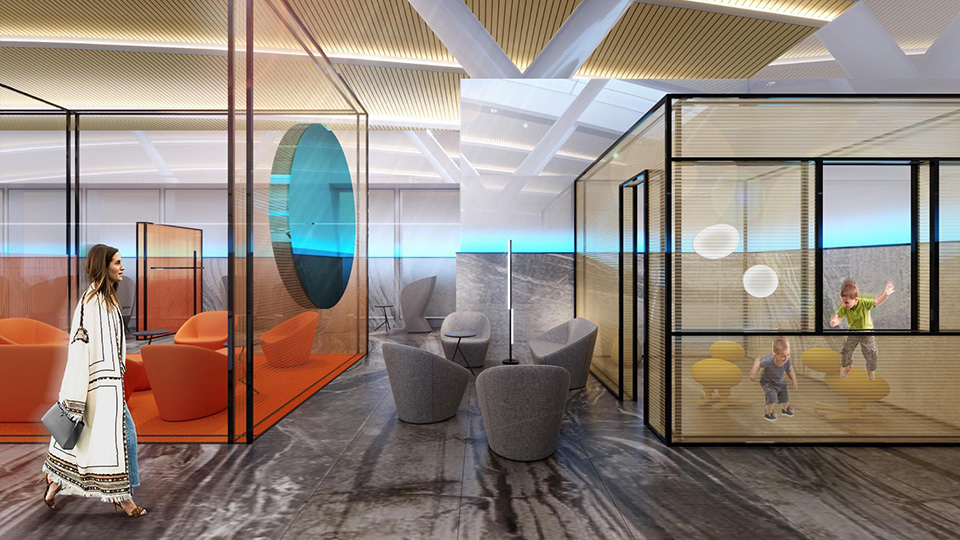 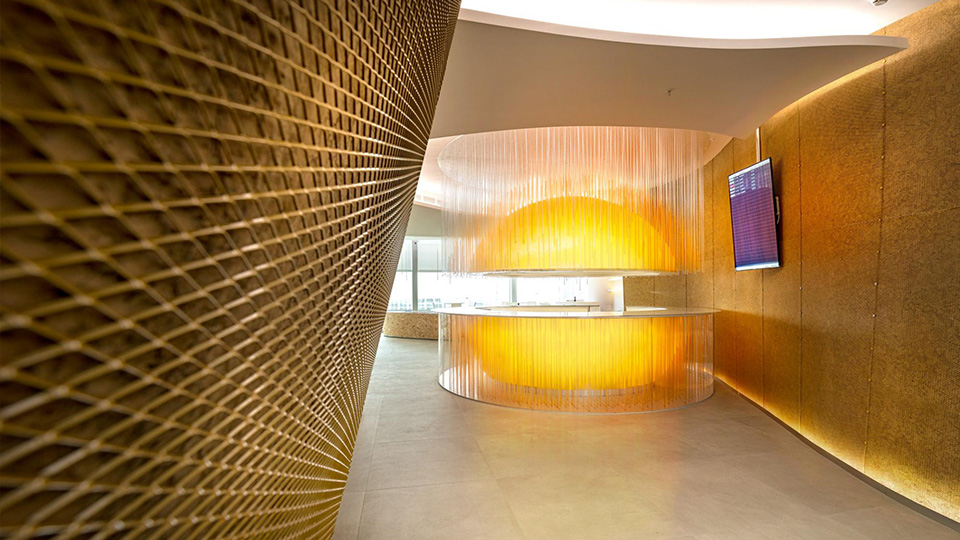 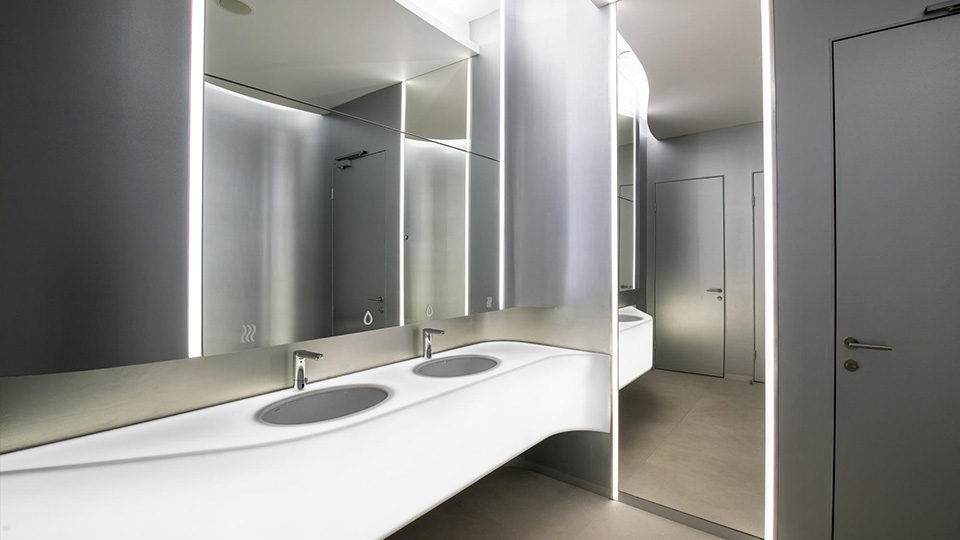 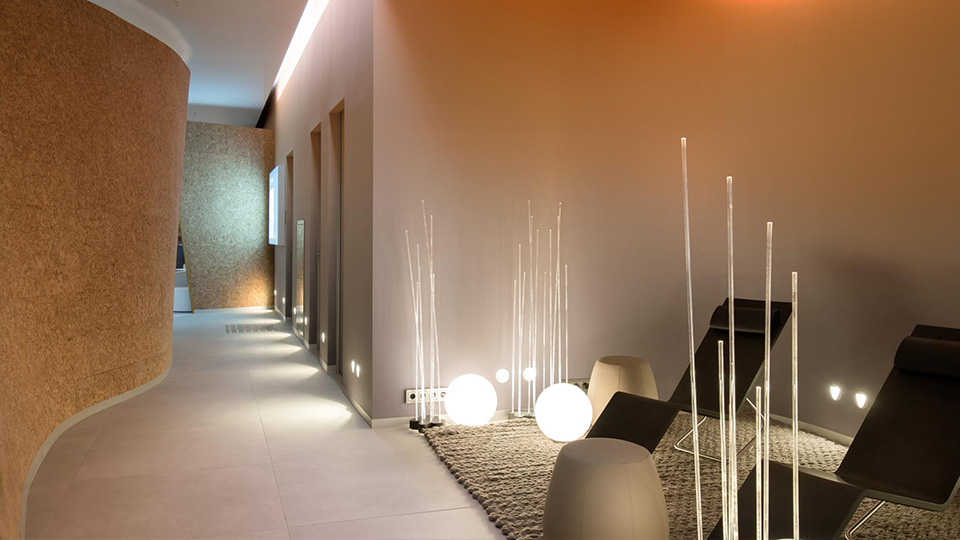 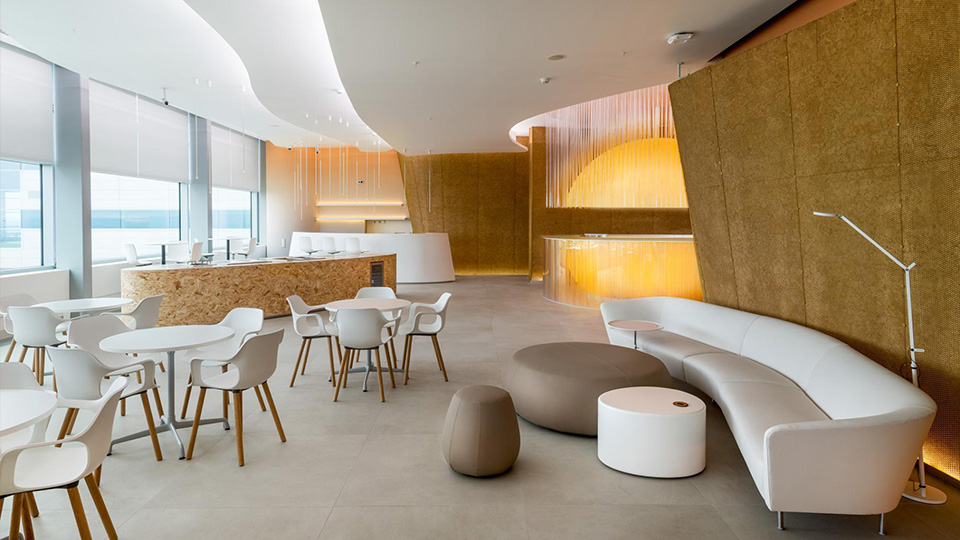 Platov International Airport in Rostov-on-Don, the Sun Lounge and the Horizon Lounge

We usually pay as much attention to the design, as we do in terms of comfort and functional capabilities. When choosing the finishing material, we have to consider several various factors, such as vandal-proof protection, fire safety and reliability of material. Apart from fulfillment of applicable mandatory requirements, it’s also essential to implement the entire complex of solutions intended to create the comfortable atmosphere and the feeling that the company truly cares about every individual passenger. In particular, when designing the premises interior, we carefully consider the availability and location of electric sockets, since Wi-Fi access and ability to freely use the electronic gadgets are highly important for the passengers. For example, the design of international business lounge at Platov International included installation of special-purpose mobile tables, fixed shelves with in-built electric sockets, USB and Wi-Fi chargers. When the interior is well-designed even in such small details, then you will probably feel yourself calm and comfortable in such environment.

Speaking of comfort, what are the edges of comfort and coziness emerging at the interface point between the interiors and the visitors? For example, some early airports had used the carpet mats to create the cozy atmosphere and enhance the sound-proof properties, but later it became obvious that after invention of roll-on bags such mats only hindered the movement  of passengers and their luggage.

Well, in Dubai International they still haven’t removed those carpets, but the safety regulations there and here, in Russia, differ significantly. In Russian airports, the fire safety standards are much more strict, so usage of carpet mats is generally discouraged. In any case, the safety issues are the utmost priority of any airport interior design project.

We have designed a convenient navigation system, where apart from conventional graphic component, we’ve implanted the user-friendly spatial architectural structure, thanks to which the terminal space itself prompts the passenger where the primary traffic and where the secondary traffic goes, where the route changes occur, et cetera. This concept was already implemented as part of our first project – Koltsovo International Airport in Yekaterinburg. There we intentionally marked the key points of passenger traffic change with major architectural shapes and supergraphics. The spatial design and architecture guide the passengers and don’t let them to get lost. 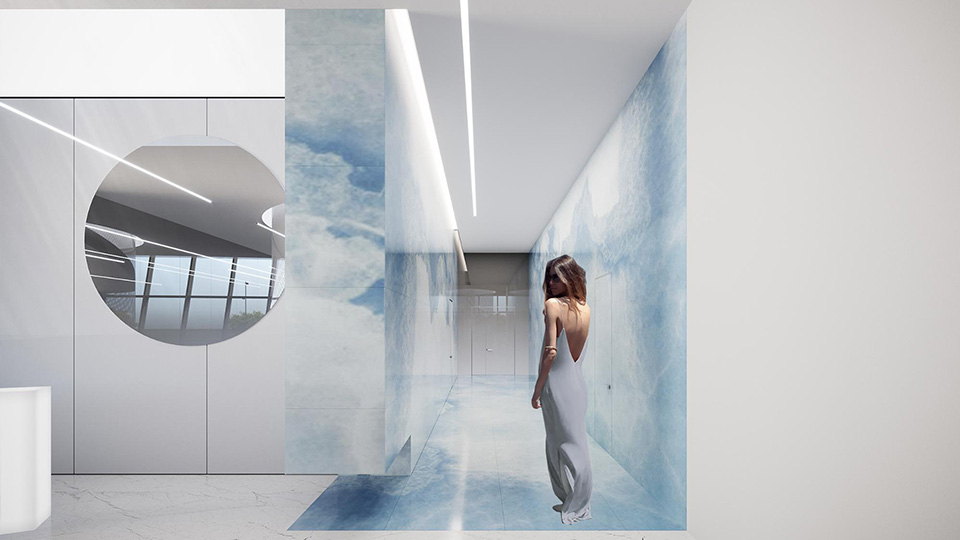 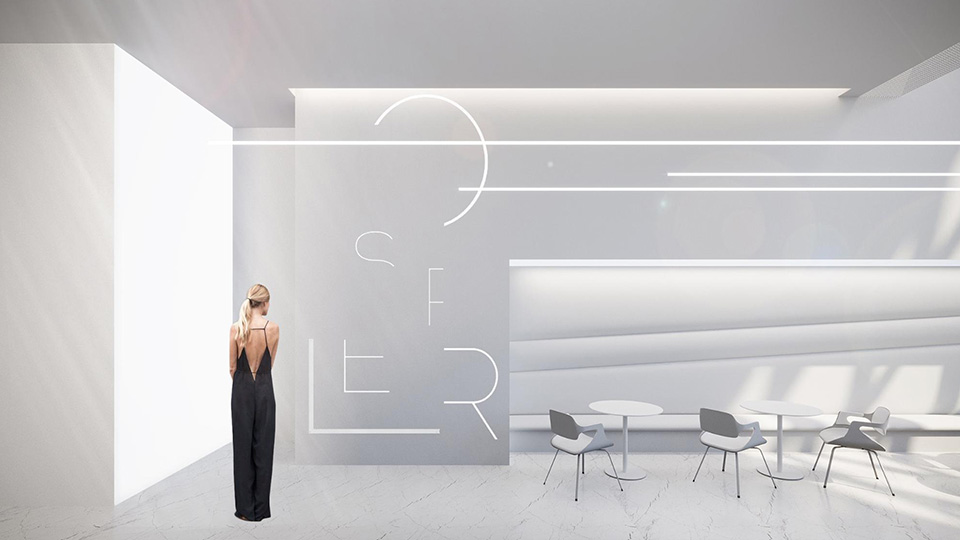 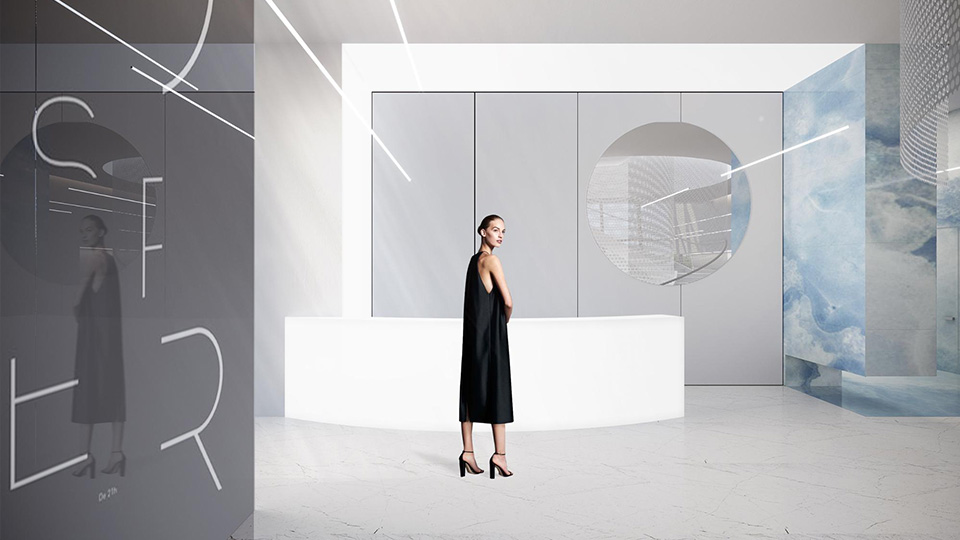 The communication scheme is built in such a way that the person may look for proper direction not only using the navigation system prompts, but also based on the intuitive perception. For instance, if the left wall is painted red and the right wall is painted green, you may easily understand that the left way is wrong, and you definitely have to turn right.

Which colors do you prefer when designing the airport interior?

Well, the color scheme is typically highly individual, since each project has its specific objectives and tasks. When we were designing Koltsovo International, we considered both the climate and the area. The airport was constructed in the early 2000s by one of the best Yekaterinburg architects, so we decided to leave the strict structure of the building intact as it is and simply integrated a contrast solution by introducing different shapes into interiors. In Russia, the winter lasts for eight months, and the people usually want something cheerful, so we used the bright range of colors. The entire airport is divided into several coloristic zones changing from the warm colors to the cold ones, from the ground to the sky. On the other hand, when working on Kurumoch International Airport in Samara, we almost didn’t use any colors: the entire airport is painted white. This was done as part of the Cosmoport concept dedicated to the Russian aerospace industry in Samara.

And talking about the rest of your projects, can you distinguish any specific lighting, color or thematic solutions?

In Platov we had two business lounge designs: the first concept is titled “The Sun”, and the second is called “The Horizon”. In the first lounge we used warm textures without bright shades, while in the second case we utilized linear cold lighting, the ceramic porcelain tiles with pronounced stone structure and strict local brightly colored geometric shapes. These are highly individual issues. 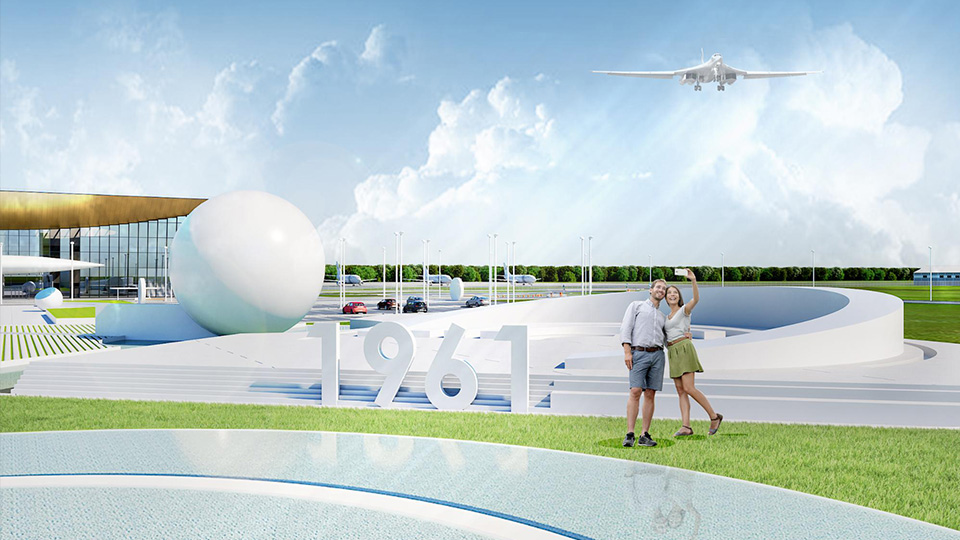 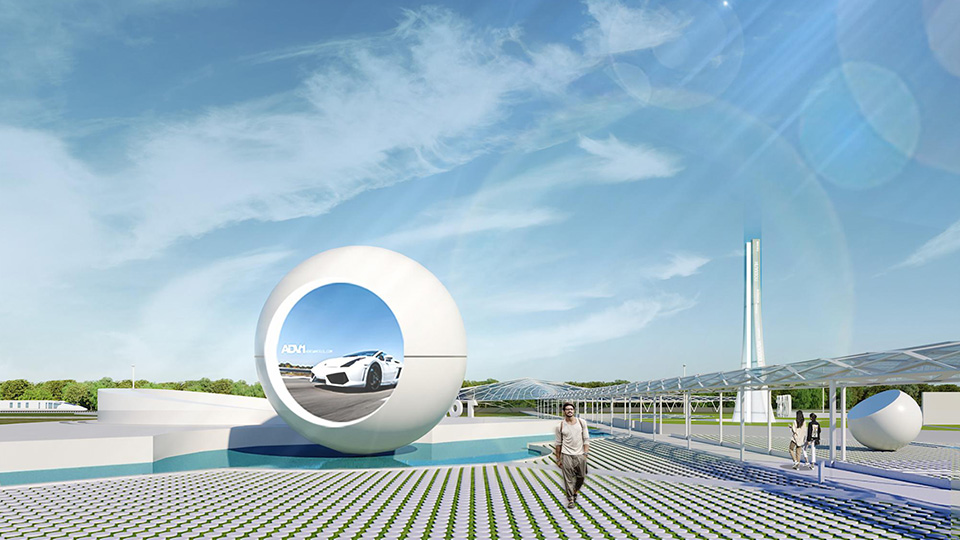 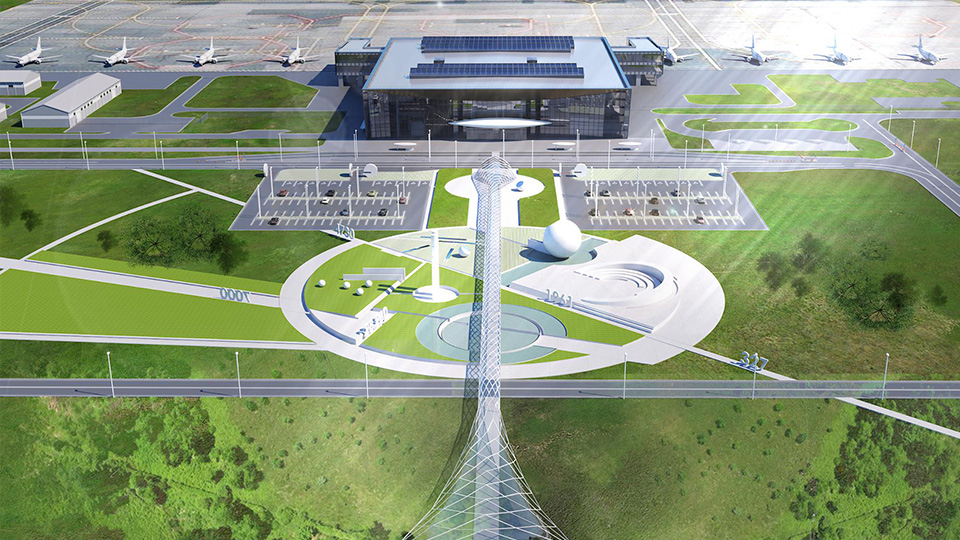 Could you please tell about the current projects of your architectural bureau?

Currently we’re working on implementation of VIP lounge design at Gagarin International in Saratov. The concept is based on the image of Gagarin and his mission. We also participate in tender for implementation of site improvement project at Gagarin International Airport newly constructed in Saratov. According to our initial concept, it’s going to be a large park with entire landscape museum featuring various art projects and media screens.

In your opinion, what is the future of regional airports?

Today we may witness the active development of even more remote regions. For example, two new airports in Petropavlovsk-Kamchatsky and Novy Urengoy are currently being designed.

Do you consider such tendencies as something new and promising?

It’s safe to say that facilitation of communications positively affects any previously inadequately developed region. This is where our future belongs 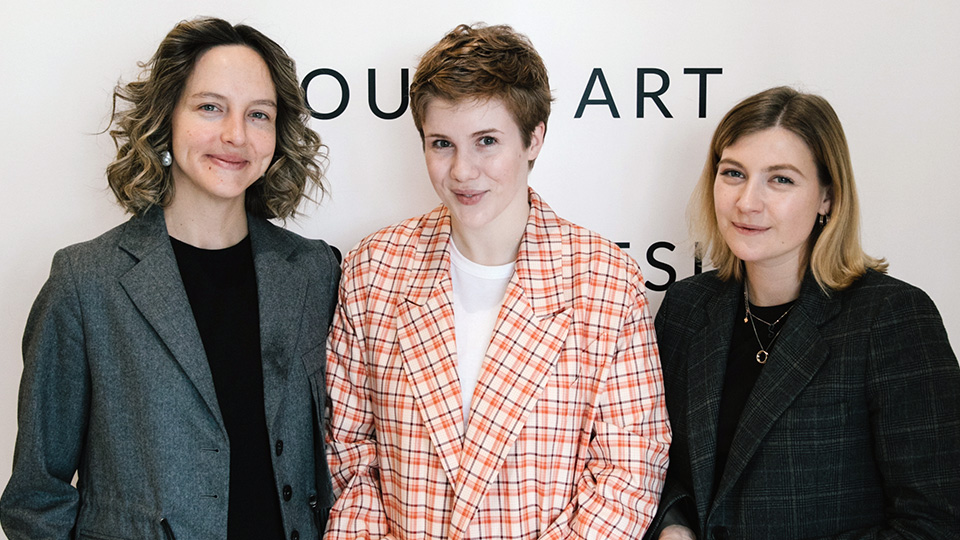 SAMPLE Founders: World of Contemporary Art Is Like Street with Ten Bars 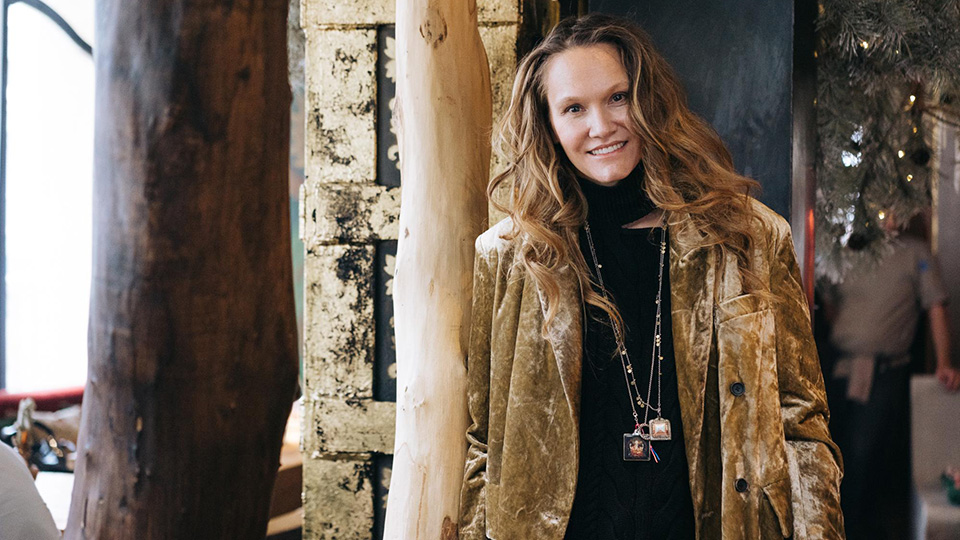 Natalya Belonogova: My Projects Are Based on Fine Sensations 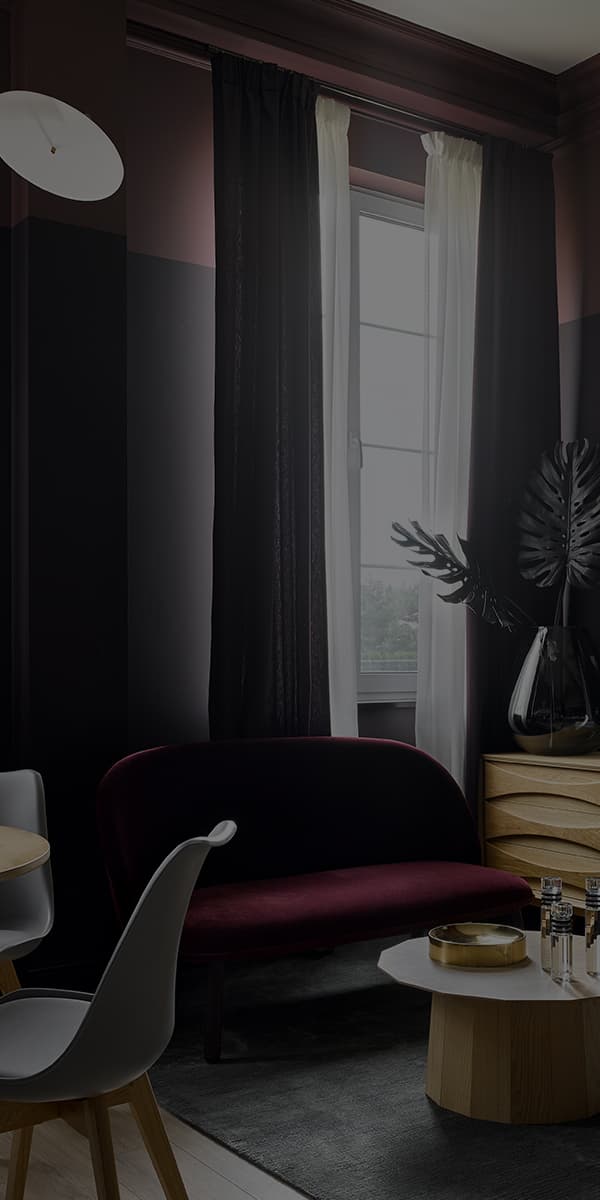